“I’ve used the LTF in my garden and my cousin’s garden. Everyone who has seen it is extremely impressed, and I plan on using it to break up some food plots. It is an awesome piece of equipment—especially the feathering blades, which level the ground really well.” 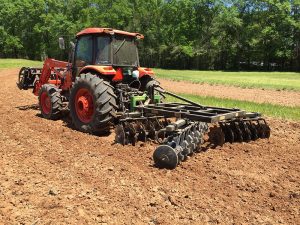 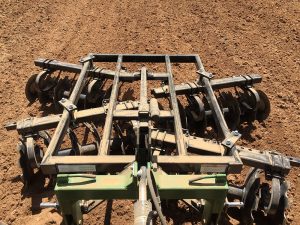 “We purchased our AMCO F17 in 2015 and have put it through quite a bit of abuse. We’ve yet to have one issue with it. We could not be more pleased with our purchase. We previously had a very old, much lighter AMCO that did the job for us for years, but we had a lot of new ground to disc and wanted to upgrade. The quality of this disc is quite impressive. I would highly recommend the F17. I would also highly recommend AMCO products in general, as this is our second AMCO product and we will not have anything else.”

“I have been 100% no-till for about 20 years, which has presented some challenges on my sloping, terraced fields. When we got heavy rains, we would have rill erosion, washouts, and gullies. When we conventional tilled, we would close these up every time we worked the fields. I purchased my AMCO Terracing Plow to rebuild my terraces and waterway berms and close the washouts and gullies, as well as tracks caused by driving with sprayers, combines, and equipment when the ground was wet. The AMCO Terracing Plow was the most versatile, heavy-duty machine I could find that would perform all the necessary tasks on my farm.”

“We own four AMCO F15 27′ Discs and an AMCO 12-row 36′ Bedding Hipper, all of which we have used for years. We started using AMCO discs back in the 1990s and have tried other brands over the years, but now we use only AMCO. They have a very good, trouble-free product!” 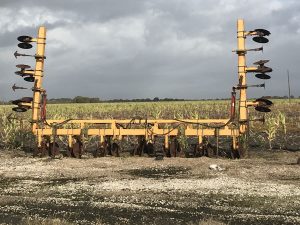 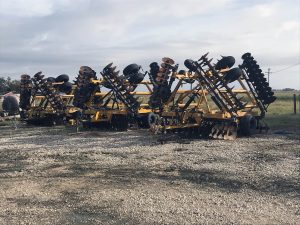 “We purchased our first AMCO AD-10 Ditcher in the spring of 2001 and ran it until the summer of 2014, when we needed a second machine. We bought a new one from our local dealer. After a day of setup, we started using our new machine alongside the 14-year-old one. It has been five more years and neither machine has missed a beat … An excellent product, with excellent customer service.”

“I worked with my local NRCS agent, who came up with a plan involving 21 terraces across my 130-acre farm. Using the AMCO Terracing Plow, I was able to complete 6,000 feet of terraces, ranging from 22″ to 6′ at their highest point. Thank you, AMCO!” 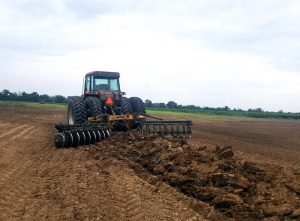 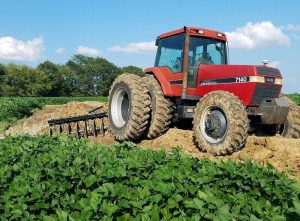 “On a trip to Arkansas, I spotted two levee plows in a farmer’s yard and pulled in to check them out as they were something I had not seen in Kansas,” Terry said. “I ended up buying both of them and hauled them the 500 miles back home. I modified one of them to use for filling in center pivot tracks when they get really deep to help prevent pivots from getting stuck. I also use it to groom township roads.”

Terry found his AMCO Terracing Plow in Kansas, but does not use it for terracing—he uses it to clean and rebuild the sides of gravel roads. The plow pulls the gravel back towards the center of the road where it can be smoothed out with his road grader. In the process it also chops up vegetation in the ditch, making it much easier to spread across the roadbeds.

“I’ve always been one to think outside the box and it didn’t take long to convince me this was the right tool for the job. I can pull ditches at seven and eight miles an hour and get more done in eight hours than some do in several days when only using a motor grader. Now, I have the attention of the community! They still don’t know what it is, but they darn sure know what it does!” Terry added.